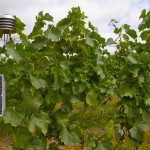 The 2011 and 2012 vintages had favorable climate conditions, supporting our transition from conventional to organic viticulture. It was not clear, however, whether we already mastered the use of bio-preparations, since the disease pressure was generally low.

In our climate conditions the weather will always be a major determining factor, therefore we acquired a meteo-station which is continuously registering all important climate parameters, needed to optimize treatment of the vines. The data are accessible on-line, hence we know in every instant what is going on in our vineyards…

2013 was a challenging vintage

Concerning weather the year 2013 was hard on us. The winter was long, cold and rich in precipitation. During the Easter, Sucha- still covered in snow- was exposed to abundant rainfall. Spring arrived quite late but its onset was rapid. During the flowering of vines it started to rain, causing the petals remain stuck on the scape, which raised concerns of possible problems with rot and mold. On the top of it, our vineyards were badly affected by herbicides, used probably for treatment of some cereals, causing deformation of leaves coupled with stagnation of development, resulting in an about 30-50% decrease in yields per hectare, comparing with the previous years. Mostly affected was the BlauerPortugieser vineyard. In the Blaufränkisch vineyard we cut-of the damaged branches but could not prevent the decrease in yields. We had also some occurrence of powdery mildew, which had cost us further about 10% of yields; however, the disease could be managed with the help of the bio-preparations.

The end of season was exceptionally rainy with total precipitation up to 160 mm during a period of four week. Rain in September is a disaster for the BlauerPortugieser due to its rather thin and delicate skin, and an overall decrease of the sugar-content in the grapes was the consequence. The season was prematurely ended at the beginning of October by an early onset of frost  (our meteo-station registered -0,8°C), which damaged the leaves and terminated assimilation in the vines. Therefore we had to harvest the white sorts, as well as the Blaufränkisch, earlier as originally planned. 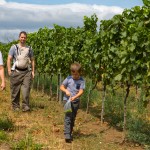 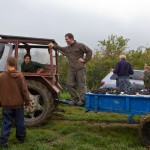 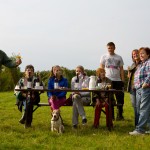 The whole harvest season was complicated by the weather. Selective picking of BlauerPortugieser for macération carbonique had to be moved from Friday to Sunday September 15th due to the heavy rain on Friday and Saturday. The rest of the BlauerPortugieser was harvested on September 21; Veltliner and Rizling were harvested already on October 4th to prevent deterioration of the grapes. Finally, October 12th we harvested the Blaufränkisch.

Challenging and niggardly year surprised us with good quality grapes

Despite of the problems with weather, we finally harvested grapes of surprisingly good quality, only the yields were much lower comparing to the previous vintage. The sugar content of the white sorts was lower than in 2012, but Blaufränkisch pleased us again with perfectly healthy grapes with excellent sugar content of 24 °N.