Year 2011 is considered to be extremely beneficial in terms of grape growing, although at the beginning it did not seem to be the case. The year was rich in precipitation and low in sunshine until the end of August. Then the rain ceased to fall almost until the Christmas. This resulted in such a drought, that it was impossible to plough the vine seedlings, and we had to postpone planting of the new vineyard until the first week of March 2012. On the other hand, the grapes remained healthy and their sugar content was nicely increasing.

In the Blaufränkisch vineyard we used for the first time nets to protect the ripening grapes from starlings, which proved to be very useful. The harvest was very nice and again perfectly healthy.

We reduced the vine load twice, but despite the fact that some of the vines were also partly affected by the winter-frost, the overall yield of 3,2 t per hectare with a sugar content of  23,2° NM was more than satisfactory.

Also the Portugieser remained healthy until the harvest. The yield was a bit lower due to the fact that we introduced one-cane pruning, contrary to the two-cane pruning which was used before. Also the Portugieser was affected by the winter-frost. We proved also how important the proper canopy management is for the overall good condition of the vineyard, as well as for increasing the final quality of the grapes. The harvest season ended with picking of the Blaufränkisch on 22 October, during which the helping family and friends could enjoy the tasty and promising still fermenting Veltliner young-wine…

Harvest as a gift 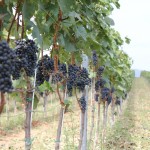 The exceptionally good and healthy grapes from the 2011 season were a gift to our beginning winery.

Sugar content ranged from 20.50° NM in Portugieser to 23,2° NM what was reached in Blaufränkisch. Acidity of purple grapes was, especially compared to the 2010 vintage, low but Veltliner had optimal acidity, despite the high sugar content.

With gratitude and humbleness at the same time, we embarked to accompany the exceptional 2011 vintage grapes on their way of transformation into wine of exceptional quality, as we hoped…

That 2011 was truly an exceptional vintage proved also the awards which were granted to both Blaufränkisch and Portugieser wines born from the grapes of this year.

Blaufränkisch 2011, selection of grapes, became our first wine elected as the champion among all read wines at the competition Vinum Superbum 2013, it gained a gold medal at the prestigeous Concours Mondial de Bruxelles 2013 and  was chosen to be among the best 100 Slovak wines in the National Salon of Wines. This superb wine confirmed its „golden“ status by gaining a further gold medal at Danube Wine 2014.

BlauerPortugieser 2011 barrique did also prove itself, and was ranked as the second best of all competing international Portugiesers in the prestigeous Grand Test of the journal WINE & DEGUSTATION 3/2014 . It gained several other awards, among them a gold medal in the wine competition of Sv. Jur 2014, a silver medal in the international competitions Portugieser du Monde and Danubia Wine 2014, as well as the Price of the Head of Region for the best Portugieser at Vino Tirnavia 2014. We were particularly pleased that this wine made it to the National Salon of Wines, being only the third selected Portugieser in the 9-year history of the National Salon.

Red wines from the exceptional 2011 vintage matured from 8 to 26 months in old as well as new oak barrels with different levels of toasting and from three different producers. Which barrels to blend and when to bottle the wines was decided on the base of a barrel experiment, during which we observed how are the wines of the 2011 season influenced by  various barrels. 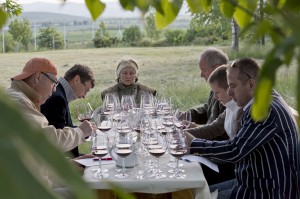